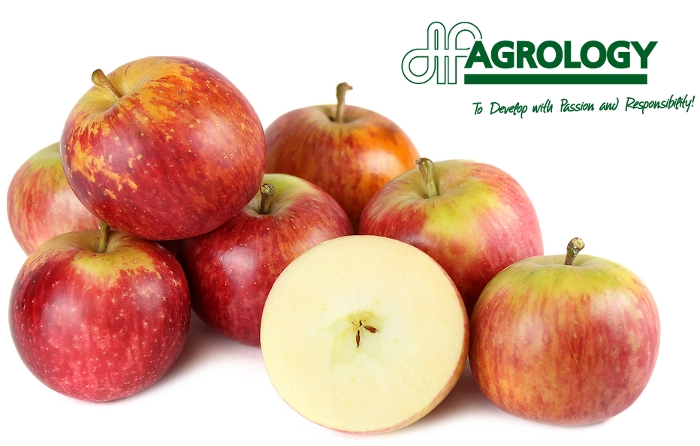 Red color is one of the main qualities in red apple varieties. Consumers prefer and choose apples mainly based on appearance, which is determined by the quality of the red coloring and the percentage of red fruit coating (Lancaster and Dougall, 1992). The dominant colorants responsible for the red coloration of the apples, not only contribute to the better appearance of the fruits, but at the same time enhance the metabolism and prevent cardiovascular problems in the human body (de Pascual-Teresa et al., 2010).

The colorants formation and development in apples has been the subject of research for nearly a century (Fletcher, 1929) and depends on a variety of factors. The most important of these is the exposure of plants to abiotic stress, such as UV radiation (Arakawa et al., 1985), the difference in maximum and minimum daily temperatures (Blankenship, 1987) and the nutritional state of the tree (Chun, 2002).

The formulation was applied to a commercial orchard in Alexandria region on 15-year-old trees, ‘Fuji Nagafu 12’, in the form of a linear pulse modulation. Firstly, 5 trees were selected for the application that was foliar performed, with the solution applied at a pressure of 2.5 psi. The product was applied 14 days and 7 days before harvest (harvest date 29/9/2016) at a concentration of 40 cc Suprafix® PhosCa in 8 liters of spray solution.

The sampling of the fruits took place on the day of harvest in two zones (1st low zone: harvesting fruit on the tree up to 1.7 meters from the ground, 2nd high zone: harvesting fruit on the tree that was above 1.7 measures from the ground). In total, 140 kg of apples were harvested, approximately 70 kg per application (control and preparation), of which 35 kg were placed in the low zone and 35 kg in the high zone.

After harvest, the Fuji apples were transported to the laboratory, where a color determination was carried out. Color evaluation was performed with a colorimeter (model Minolta CR-200 Minolta, Osaka, Japan) in 150 apple fruits in Agrology treatment and in 150 apple fruits in the control, which was calibrated using a standard factory white plate, and the measurements were taken by placing the colorimetre head in the red side of the apple fruits. The values in the coordinate system a * were then recorded. The a * value represents the color gradient from green (a * negative) to red (a * positive).

In addition, a visual evaluation of 50 fruits with 3 replications per treatment was performed for the coating of the fruits in red in 3 classes

Subsequently, flesh consistency was determined (Friction Firmness Tester). After 2, 4 and 6 months of cold preservation at 0 ° C, determination of flesh consistency, percentage of coating and color was also performed.

The application of Suprafix® PhosCa to this Success Story has contributed to:

Picture 1. Red color indicator. Red apple skin color of 150 apples per treatment. An improvement in the red color of the fruits was observed by the application of Suprafix® PhosCa by 300% compared with the Control.

Picture 2. Red skin coat of 150 apples (75 low and 75 high tree zone) per treatment. Statistically significant (*) differences were found based on T-test (T-test) for independent samples at significance level P ≤ 0,05. On the right side (top picture), apples that have been treated with Suprafix® PhosCa have been identified. On the left side are the apples used as a Control.

With the Suprafix® PhosCaan increase in Fuji apples preservability by 3,5 months was observed. With the application of the Agrology Special Nutrition Programs, a higher resistance to mechanical stress of the fruit flesh was measured, even after 6 months of cold preservation.

Picture 3. Apple resistance in mechanical Pressure. With the application of Suprafix® PhosCa, a higher resistance to mechanical stress of the fruit flesh was measured, even after 6 months of cold preservation.

The Suprafix® PhosCa presented differences compared to the Control regarding the fruit’s color parameters after cold preservation (0 ° C). In particular, an increased red color was recorded, expressed by the color parameters a * and Hue angle (Figure 4 A and C). Also, an increase in the red color coverage rate, which varied in percentages that exceeded 45% for Suprafix® PhosCa was observed and varied at all time points relative to the Control (Picture4B).

Fletcher, L.A. (1929). A preliminary study of the factors affecting the red color on apple. Proceedings of the Society for Horticultural Science. 26, 191-196.

This trial was carried out under specific field conditions and should not be replicated without the guidance of an agronomist or the Technical Department of Agrology. In all cases, Agrology products and programs must be applied in accordance with the label.